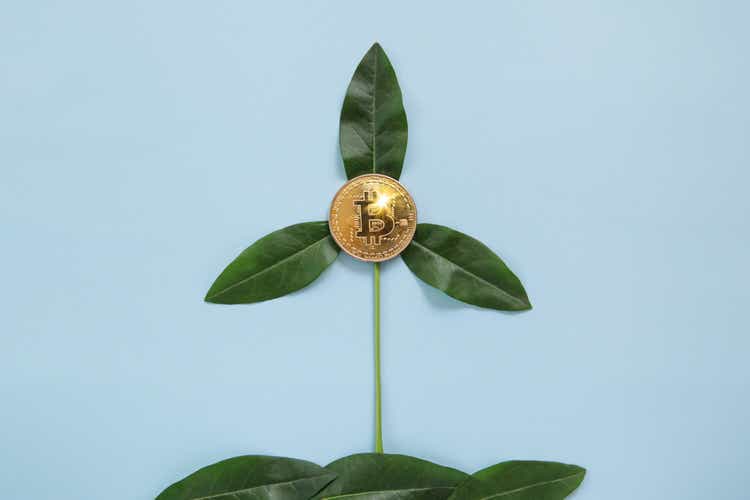 Over the past four months, Marathon Digital Holdings’ (NASDAQ: WOMAN) production growth trajectory has rolled over. Similar to last November, in April maintenance problems at the power station serving their Hardin, MT location reduced potential production by about 30%. Worse, expected increases in the company’s hash rate capacity from the expansion in Texas are behind schedule because of regulation and permitting issues. And of course, competition continues to increase with Bitcoin’s (BTC-USD) ever-growing total network hash rate.

But Marathon Digital is approaching a significant inflection point in their production growth trajectory. With the underlying price of Bitcoin near 52-week lows and the company’s market cap having been significantly further punished for the recent production woes, the company now presents a favorable risk to reward scenario. This is because a large portion of the company-specific concerns are being proactively addressed, but the market is not yet pricing in what appears to be the likely outcomes. The article below looks at the issues and where Marathon Digital’s hash rate is likely headed in the coming quarters.

Last year there was a large focus in the mining space on acquiring rigs and Marathon Digital was a leader among listed, western mining companies in amassing purchase agreements, especially with Bitmain. To date, the company has purchased 199,000 S19 miners at a blended cost of $ 54 per terahash / second of computational power. But with the crackdown on mining in China, the focus has somewhat shifted over the past year from equipment contracts to acquiring reliable power sources. Miners are looking to develop ESG-friendly power sources at scale with reasonable pricing and an eye toward grid responsibility.

In Texas, Compute North, one of Marathon Digital’s hosting partners, is building out infrastructure to house and power 100,000 of the S19 miners. This equipment represents 10 EH / s of computing power and for a size reference, the current total Bitcoin network hash rate is about 220 EH / s. The power sources are predominantly wind & solar farms and importantly, the facilities are “behind the meter”.

This novel behind the meter system has taken longer to implement than was initially believed. Interestingly, the delays are not from traditional operational issues, but rather related to obtaining the necessary permissions. On last week’s inaugural earnings call CEO Fred Thiel described the delay as follows.

In our case, the friction has manifested primarily in the form of regulation and permitting.

..the friction relates to breaking the mold and deploying our miners behind the meter at power facilities operated by some of the largest renewable energy companies in the United States.

The initial hold-up came because approvals were needed for a connection from the grid back to the power station to provide power for the miners when the renewable power sources lagged. And this was a new situation for the grid operators.

In March grid operators approved 280 megawatts at the first Texas facility to be energized. However, the energy partners need an additional third-party consent before energizing the installed miners. Management expects a resolution on this last hurdle this month and an additional .4 EH / s to come online.

In the April production update, the company provided the following outlook.

As the Company’s power provider finalizes the energization process, construction of Compute North’s first major facility in Texas has continued at pace and thousands of additional miners are being installed and prepared for energization. Given the current construction and deployment schedule, Marathon continues to expect all 199,000 miners, producing approximately 23.3 EH / s, to be deployed by early 2023. Additionally, the Company continues to expect its mining operations to be 100% carbon neutral by the end of 2022.

So for perspective on the expected coming pivot, Marathon Digital’s current 4 EH / s represents about a 1.8% share of the current 220 EH / s total Bitcoin network hash rate. Conservatively assuming rapid growth to 400 EH / s for the total network by this time next year, Marathon’s projected 23 EH / s would represent a 5.8% share.

As mentioned above, maintenance problems at the coal-fired power station serving the company’s location in Hardin, MT have significantly impacted production over the last 6 months. In April the company announced it intends to move its Bitcoin miners from the facility to a more reliable situation. The move also has the ESG benefit of sourcing sustainable power, though one possible downside could be a reduction of economic stimulus to the local Native American community.

The move is planned in stages during the third quarter. The idea being only a small portion of the Hardin capacity is taken down at one time. The miners will be cleaned and repaired, then loaded on semis and moved to the new location. On the recent conference call, Thiel described the process to Kevin Dede of HC Wainwright.

..it’s about you can figure 7 to 10 days door-to-door for moving miners. And you will see in Q3 kind of takes – kind of 7% to 8% of the capacity of Hardin down, 10 days later that capacity will pop up at a new site. And then we will phase that across Q3, so that we are hopefully never going to see more than a 10% decrease in Hardin’s capacity at any one time.

Though less crucial than the permissions issues discussed above for the new Texas facility, remedying the reliability issues presented by the Hardin coal-fired plant are a second key step to reversing the rollover in mining production growth. And importantly, the solution enables the company to meet the goal of its mining operations being 100% carbon neutral by the end of 2022.

Even based on current production levels, from a price to earnings perspective Marathon Digital is not trading at a premium and at worst is fairly priced. More importantly, the market is simply not pricing in the likely tripling of production in the coming quarters. The discussion below goes over first quarter EBITDA to illustrate the reasonableness of the current market cap.

In the first quarter, the company had about $ 52 million in revenue on 1258.6 bitcoins. So the approximate average revenue per coin the company mined was about $ 41,000.

The net loss for the quarter was almost $ 13 million, but does include substantial non-cash depreciation costs which are by practice included in “Cost of Revenues”. Depreciation is the primary contributor to the significant difference between the net loss and the EBITDA.

Here it is useful to note that interest expense, at about $ 3 million, is relatively low and only a small contributor to the difference. Taken and compared with the earnings data below, it also points to the company’s conservative financing and strong current ratio.

Moving to adjustments, earnings were also significantly lower because the fall in the price of Bitcoin reduced the value of the company’s holdings. This is passed through to earnings in two places, by an impairment and in “Other income”. Of course, in quarters where the price of Bitcoin is up, the accompanying earnings should be discounted from the earnings from operations. Last, a little over $ 9 million of compensation was stock based but directly counted toward costs, though it is also reflected in the share price through the share count.

While each particular of the methodology can rightly be debated, one may usefully remove these large non-cash, mostly non-recurring charges to get a more fair picture of operations, especially if their effects are already counted on the balance sheet. This adjusted EBITDA was over $ 39 million and represents $ 31,000 per coin the company added to custody. Interestingly, that makes the adjusted cash cost per coin right at $ 10,000.

Using the math above, the fall in the price of Bitcoin since the first quarter is set to cut earnings per coin mined by about a third. If we annualize this new run rate, full year adjusted EBITDA would be close to $ 100 million. And with the current market cap near $ 1.23 billion, Marathon Digital has a reasonable, low teens EBITDA multiple, especially in light of the strong current ratio and substantial growth prospects discussed above.