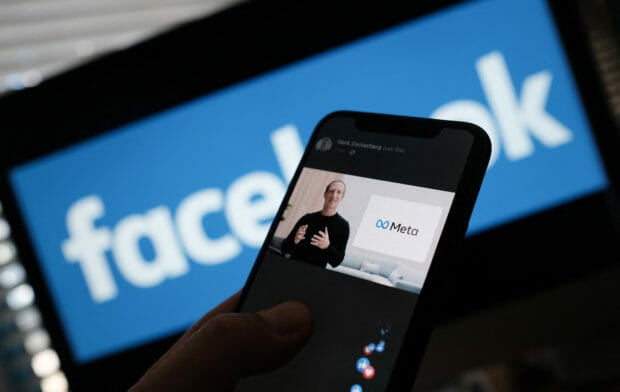 In this illustration photo taken in Los Angeles on Oct. 28, 2021, a person watches on a smartphone Facebook CEO Mark Zuckerberg unveil the Meta logo. (Photo by CHRIS DELMAS / Agence France-Presse)

PARIS – Facebook’s parent company Meta and a French digital training firm will launch a “metaverse academy” in France for the new academic year, the two organizations said on Sunday.

Seen as the internet’s next great technological development, the metaverse refers to an immersive digital world that aims to recreate real life via augmented or virtual reality and take the web from 2D to 3D.

The school’s goal in its first year will be to train for free around 100 students in two roles, specialist immersive technology developers and support and assistance technicians, Meta’s vice president for southern Europe Laurent Solly told Agence France-Presse (AFP).

The teaching method will be in-person and will revolve around projects, with a focus on the 3D world and interactions in the virtual universes, said Frederic Bardeau, co-founder and boss of Simplon, the French firm working with Meta.

Located in the capital Paris and other cities including Lyon, Marseille and Nice, the metaverse academy will train 20 students per city each year.

Particular attention will be paid to diversity. Solly said the target was for 30 percent of the first cohort to be women, while Bardeau said he would not look at applicants’ CVs and endorse positive discrimination.

In October 2021, Meta said it intended to create 10,000 jobs in Europe in five years’ time to build the metaverse, the US technology giant’s new strategic priority.

The goal is tied to predictions that future job skills demanded by employers will be closely tied with the metaverse.

Meta and Simplon said 80 percent of the careers that will exist in 2030 have not been invented yet, highlighting the need to develop training schemes now.

Who is Javier Olivan, Meta’s next COO?

The latest tech news delivered to your inbox

Don’t miss out on the latest news and information.