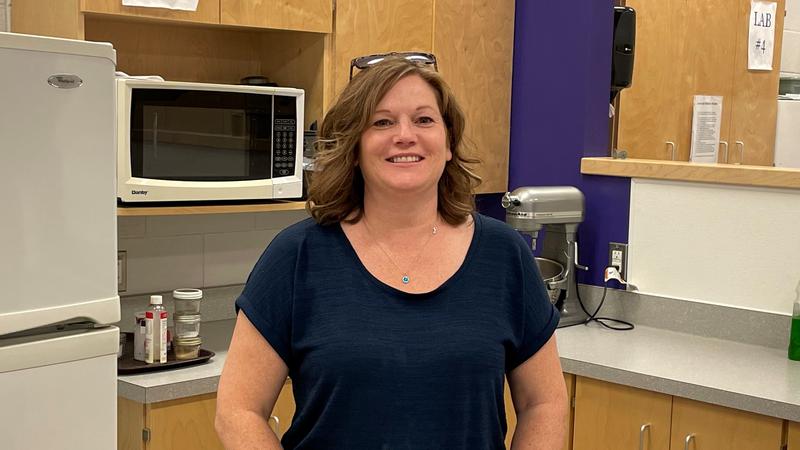 In the mid-1990s, Haugen accepted a position at Pre-Cam Community School where she mostly taught Grade 1, as well as Kindergarten and high grades. She worked there for 14 years before accepting a job at Churchill in 2008.

“I took over teaching home economics, which is Grades 7 to 9 cooking and sewing,” Haugen said. “I took over the Food Studies 10 and 30, and Clothing and Textiles 10 and 30. I always have taught drama and about seven years ago I started teaching English, as well as cosmetology.”

Haugen called teaching a rewarding career, but one that has also changed immensely during the last 30 years. She explained there’s been a lot of paradigm shifts in the methods and strategies and the way students are taught. The students themselves have also changed.

“Technology has advanced so much and social media and all of that didn’t exist when I was teaching at Pre-Cam. It was all just starting and it’s gotten crazy in the last 15 years really, ”Haugen said. “I’ve always believed that cellphones and technology are the worst and the best invention both at the same time. They are great and I love my phone, but they can be a really big distraction to learning. ”

Throughout the years, Haugen was heavily involved in the drama clubs at both Churchill and Pre-Cam. While at Pre-Cam she organized a dozen plays and at Churchill she produced 10 musicals. She said drama was a highlight of her career because she enjoyed watching the students perform and seeing them pull together a show.

Since Haugen taught students at La Ronge’s elementary school before moving over to high school, she had a unique opportunity to watch students work their way through the schooling system. She said it was an emotional moment when the first group she had taught in Kindergarten graduated.

“It was really great in a lot of ways because I knew the high school kids as they started coming to Churchill,” Haugen said. “That was really interesting. To see how the kids have changed and grown up was really good. ”

When Haugen finishes the short-term contract at Pre-Cam, she would like to spend some time traveling throughout Europe, as well as spend time with her husband, Brett, three daughters and seven grandchildren. She’s also interested in continuing to work as a substitute teacher or perhaps trying something new.