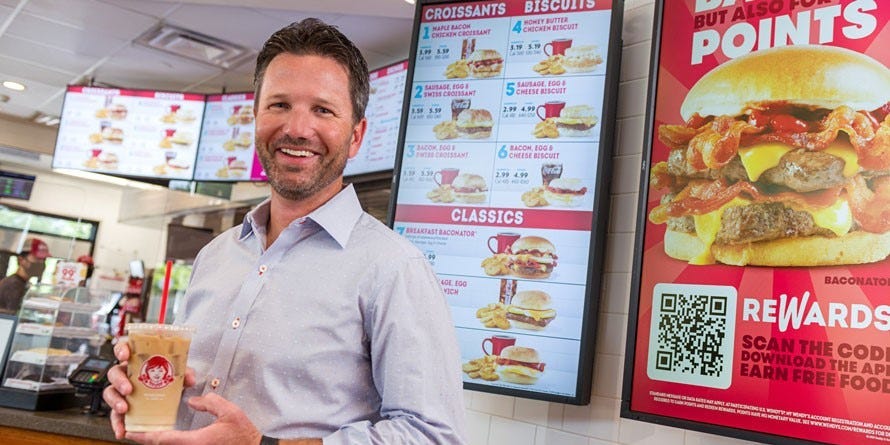 Fast-food restaurants have embraced the metaverse, from Chipotle creating a Roblox pop-up to McDonald’s filing a trademark for a virtual restaurant, as they seek to capture the fleeting attention of a gaming-obsessed Gen Z.

But the brand that has perhaps bet the most on the metaverse is Wendy’s. In March, it established the “Wendyverse” in Meta’s Horizon Worlds, the company’s social media VR platform, where customers can visit a virtual Wendy’s outlet. On June 15, it announced the next iteration of the Wendyverse, which will add a castle filled with virtual games called “Sunrise City” to promote its breakfast menu.

Leading the efforts is CMO Carl Loredo, who took the post three years ago and has been expanding Wendy’s Gen-Z marketing efforts with moves like a Fortnite partnership in 2019 and “Rick and Morty” -themed pop-up restaurant last year.

Loredo, whose efforts to stay relevant with the younger set landed him on Insider’s 2022 Most Innovative CMOs list, discussed Wendy’s metaverse marketing playbook and why it isn’t for everyone.

First, he emphasized having authentic interactions with fans, citing the brand’s success on Twitter,

and its gaming partnerships with “Mario World” and “Fortnite.”

“A lot of brands have it backwards. They jump into any of these platforms, and the first thing they’re doing is trying to slap a logo up on a wall,” Loredo said. “With Gen Z, if you come in an inauthentic way, boy, they’ll knock you out immediately.”

Knowing where customers spend their time also led Wendy’s to avoid the hype around NFTs and instead focus on Meta’s Horizon Worlds, where its target audience was more likely to be. His metaverse push echoes Wendy’s early forays into Twitch, where it amassed 113,000 followers by seeing its potential to attract Gen Z.

Loredo is aware that customers today might not even ever set foot in a physical Wendy’s restaurant. That makes it all the more important to him that digital interactions, like social media, feel authentic and make people want to come back, even if there’s no immediate sale.

To that end, Wendy’s is betting on its social media prowess to master the metaverse. Its team is already known for its snarky tweets, which have brought it 3.9 million followers and “beefs” with other fast-food Twitter accounts. And it’s made up of people with varied passions, from Disney to gaming to WWE, which lets them go “three levels deeper” when engaging with fans, according to the CMO.

“Ultimately, all those passions and being able to tie those back to fans’ passions matter a ton,” said Loredo. “Why we’ve been so good on Twitter is why I know we’re going to be great in the metaverse and the Wendyverse as well.”

Wendy’s also made sure the Wendyverse isn’t just for hardcore gamers or tech enthusiasts. People will be able to engage by watching through Horizon World’s web interface, which Meta is working on, or by using the Wendy’s app.

Consulting firm McKinsey & Co. recently estimated that the metaverse could produce up to $ 5 trillion in value by 2030. For now, ordering has to be done through the app, but Loredo envisions a time when diners can order food through Wendy’s virtual restaurant and have it delivered to their physical house .

“Clearly there’s a commerce side of this down the road,” he said. “What we’re doing is following our consumers and that means that initially, it may not be the biggest overall economic impact.”

As much as “Sunrise City” is a great example of engaging fans in a cool environment, it’s also a cautionary tale for brands that might want to emulate Wendy’s virtual success, Loredo said.

“Often I get a question from Fortune 50 brands: How do we do what you do? And my immediate response is, please don’t try to do what we’re doing,” said Loredo. “Because it’s unique to Wendy’s. I don’t know that every brand has consumers that are going to be in the metaverse space, at least immediately.”

“What we’ve done a great job of is continuing to listen to our consumers, be mindful of the places that they’re interested in and then evolve along with them. And I think that’s the key to this,” he added.