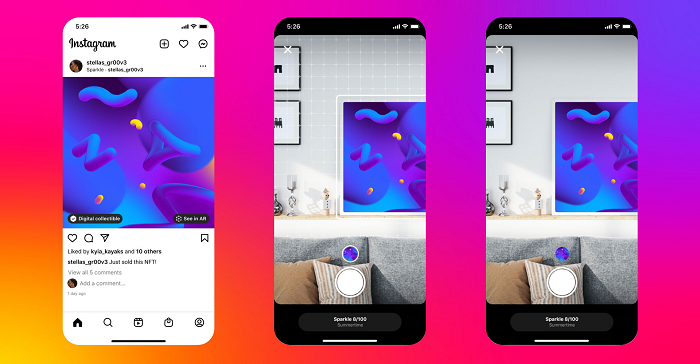 Looks like we’ll soon find out, with Instagram testing new AR stickers and text within Stories, which would enable you to place 3D objects into real world scenes.

As you can see in these examples, shared by app researcher Alessandro PaluzziInstagram’s developing a range of AR elements for Instagram Stories, which will essentially add animated, digital objects that you can overlay on your physical space.

They look similar to Snapchat’s World Lenses, which it launched back in 2017.

As you can see in this clip, Snapchat’s World Lenses enable you to add virtual objects into your real world scenes, which seems to be how Instagram’s AR stickers will also interact in physical space. Snapchat also added an AR free drawing tool in 2019, which provides similar functionality.

So it’s not a revolutionary idea, as such, as Snap implemented similar tools several years back, but they haven’t been available to Instagram’s billion-plus users before, which is, in itself, a big step.

Instagram’s also looking to incorporate another AR element, with its new NFT display options also including a ‘See in AR’ feature.

As explained by Meta:

“For the first time, you’ll be able to display 2D NFTs you own anywhere you want using mobile AR. And when you do, you’ll experience an entirely new pride of ownership in those digital items because you’ll be able to see them and share them in the physical places you’re in every day.”

Well, sort of. They’re obviously not really there, in the physical space, and you’ll only be able to see your AR NFTs through the Instagram camera. But it could add another perspective to digital artworks, and provide more context as to how that object might look in, say, your living room, as shown here.

Which then leads into the next stage:

“While we’re starting with simple AR display and sharing, this will be a key step towards enabling fully AR and 3D-native immersive NFTs in the future, like virtual items and accessories, sculptures, clothing, and more.”

So the broader view is that these initial AR elements on IG will lead people through to the next level of engagement with digital items, which will then help usher in its broader metaverse experiences, where virtual objects will play a bigger role in how you interact .

AR elements within Stories are another part of this, which is essentially Meta’s effort to bring these elements into the mainstream – so while it may seem like a small addition in isolation, it will play a part in the broader plan to transport users through to metaverse experience.

Instagram hasn’t provided any detail on a full rollout of its AR elements as yet, with the ‘See in AR’ option only available to ‘a small number of Instagram creators and collectors’. But you can expect to see more on this soon, as Meta continues to seek new ways to merge its current audiences over to the metaverse space.