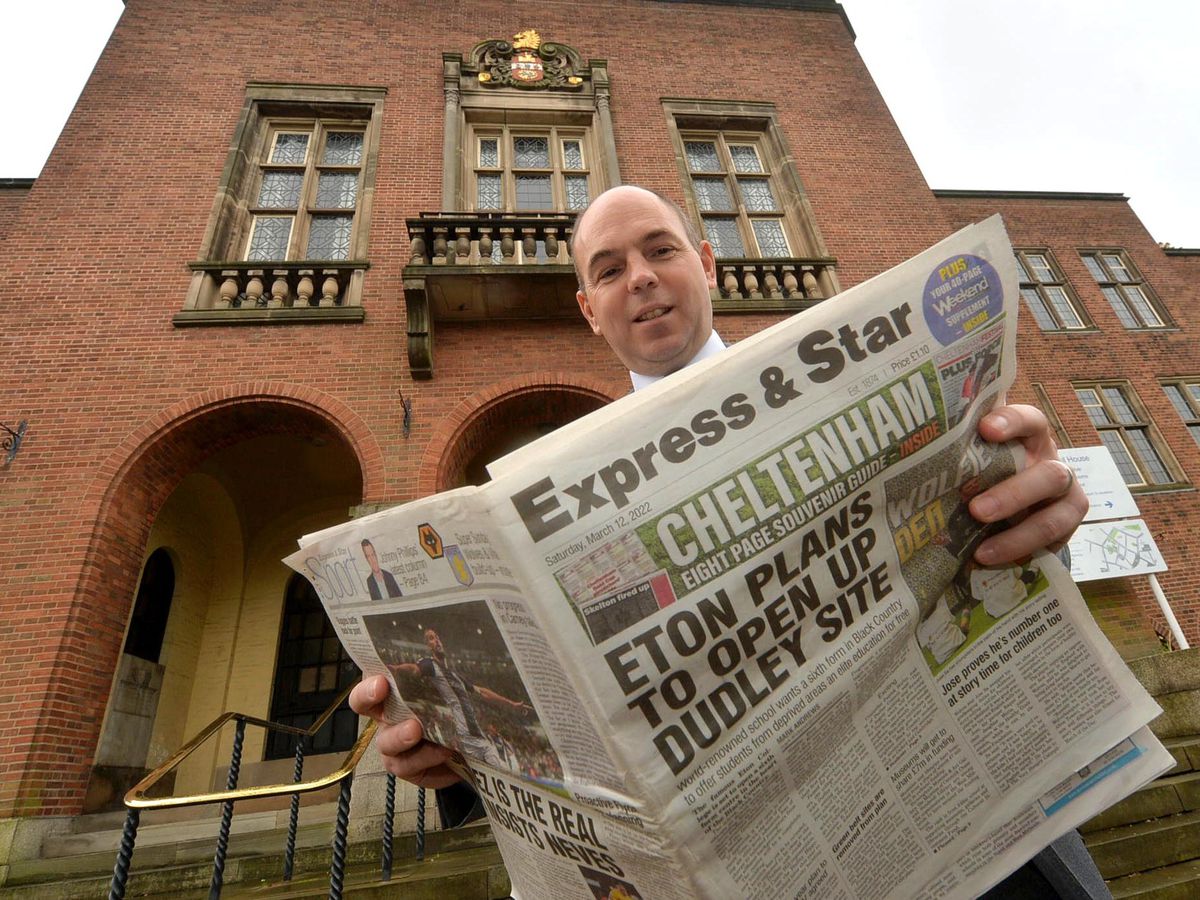 And, outlining his plans for a new sixth-form center in Dudley, the headmaster of Eton College wants to see pupils from the Black Country holding equally lofty aspirations.

“We want young people in the Black Country to have the mindset of thinking there’s no ceiling to their ambitions, that it’s normal to aim high, and giving them the tools to support that,” says Ian Henderson, who has led the world’s most prestigious school for the past seven years.

“Old Etonians have gone on to do an incredibly diverse range of things in their lives, and we want young people in Dudley and the surrounding areas to be able to do the same.”

When Mr Henderson became headmaster of Eton in 2015, he became the youngest ever holder of the post at the age of 39. Not only did he bring a youthful vigor to what is still a fortress of great tradition, he also made it clear he wanted to end the perception that the world-famous school was a bastion of privilege, and open it up to pupils from a wider range of backgrounds.

“We want talented boys to be able to come to Eton whatever their financial circumstances,” he said.

Mr Henderson wants the new sixth-form, which is expected to open within three years, to give youngsters in and around the Black Country the same opportunities of an elite education that has been enjoyed by the rich and powerful for centuries.

“There are a lot of talented young people in Dudley and the surrounding areas who get good GCSE results, but don’t then convert these into the A-levels required to go on to the top universities,” he says.

“The aim of the new college is to bridge that gap, to give talented young people the opportunity to achieve their true potential.”

The new college will take 240 pupils each year, having a total capacity of 480 when it is fully operational. Creating such an institution from scratch in just three years sounds an ambitious target, and the location has yet to be decided.

Dudley Council leader Patrick Harley says the authority is looking at a number of sites, although it is unlikely to be around Castle Hill or Castle Gate, where a new university center is planned for the site of the Dudley Hippodrome theater, and where the Black Country and Marches Institute of Technology was recently built.

“I think there’s barely room for another blade of grass at Castle Hill,” says Councilor Harley.

“We are looking at a couple of sites, it will be in or very close to the town center.”

Pupils in Dudley will not wear the traditional top-hat and tailcoat worn by boys at the Berkshire school, and the famous Eton wall game is unlikely to be on the agenda either – although Mr Henderson says part of the Eton experience will be summer camps at the main campus, where they will get the chance to take part in such activities.

Mr Henderson says the closest parallel to what the new school will be like comes from the London Academy of Excellence, which it helped set up in Newham, East London, in 2012, which has seen an 11-fold increase in the number of pupils going to elite universities. At the time, Newham was the second most deprived borough in England, and just three pupils in the whole of the borough went to Oxford or Cambridge universities.

“Last year, from the London Academy of Excellence alone, 37 pupils went on to study at Oxford and Cambridge,” he says.

“But many more went on to medical school, to Imperial College, and to many other top universities. It’s not all about Oxford and Cambridge.”

No pupil at the new school will be required to pay fees, and the majority of the funding will come from central government through the normal free-school framework. However, Eton College will contribute an additional £ 1 million a year on top of that, which Mr Henderson says will help fund many of the extracurricular and support services he says will be crucial to the school’s success.

Most of the teachers will be recruited locally, although Mr Henderson says existing teachers at Eton College are also expected to take classes.

“I don’t think there will be any shortage of teachers wanting to come to teach at our college,” he says.

“I think the important thing is that you have teachers who love their subjects.”

Mr Henderson says that while the school makes no apology for its strong focus on traditional academic subjects, much of Eton’s success is down to the fact that it treats its pupils like adults, and encourages them to think for themselves and make their own decisions.

The school’s lecture program, for example, sees a wide range of public figures come into school to take questions from pupils, and Mr Henderson says this plays an important role in boosting their confidence and developing their minds.

“We have a range of high-quality speakers come into our school,” he says.

“From across the political spectrum we have had speakers such as George Osborne and George Galloway, we have got a Holocaust survivor coming in, we have leaders from the world of business and science.

“Students are encouraged to ask questions, and to try to see things from a range of different perspectives.”

He says that as well as its academic program, the new college will include a huge range of extracurricular activities to provide students with extra skills, both academic and recreational. There will also be an emphasis on teaching youngsters “soft skills” such as public speaking, critical thinking, debating and performing well in interviews.

Dudley is one of three locations chosen for the new Eton sixth forms, which will be run in partnership with the Star Academy Trust – the other two will be in Middlesbrough and Oldham.

Former pupils of Eton include Prime Minister Boris Johnson, Archbishop of Canterbury the Most Rev Dr Justin Welby, novelists George Orwell and Ian Fleming, and Princes William and Harry. Fees cost up to £ 44,000 a year, although approximately 20 per cent of pupils receive financial support.

Unlike the Berkshire school, the Dudley sixth-form will be open to both boys and girls, and the application process will be pretty much the same as any other sixth-form. Any youngster in the catchment area – which as well as Dudley, is also likely to include Wolverhampton, Walsall, Sandwell and South Staffordshire – is welcome to apply. While admission will be based on GCSE results, other factors will be taken into consideration and weighting will be given to pupils from disadvantaged backgrounds.

“We want to see more pupils who come from difficult backgrounds, including those from families on low incomes, who benefit from pupil-premium funding, looked-after children, those leaving the care system, those who may be the first in their family to go university, “says Mr Henderson.

Is there a danger that this will create a “squeezed middle” of pupils who will not meet any deprivation criteria, but whose parents are not sufficiently well-off to afford private education?

“This is not about excluding anybody,” says Mr Henderson. “There will be pupils from all backgrounds, I think it is good for all pupils to have a range of different backgrounds. But I make no apology for giving a helping hand to those from more challenging backgrounds.”

Councilor Harley, who did not go to university until his 30s – and had to fund his MBA course at Wolverhampton University with the help of a career development loan – said he would have jumped at the chance to enjoy such an education when he was a youngster .

“It’s fantastic that my grandchildren could have the opportunity to have a top-class education here in Dudley,” he says.