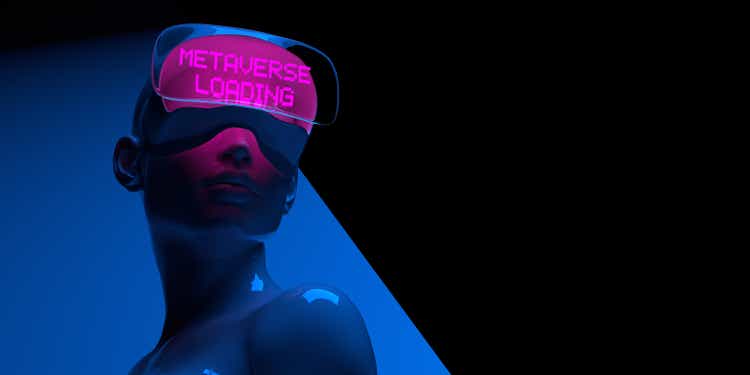 The metaverse has gotten a lot of attention in recent months, despite huge uncertainties about what it will look like a couple of years or decades from now. That also means that there are major unknowns when it comes to how profitable the metaverse will be for the companies active in this space. That being said, major players such as Meta Platforms, Inc. (NASDAQ: FB) and Microsoft Corporation (NASDAQ: MSFT) are investing heavily in this space and seek to expand their business meaningfully over the years thanks to opportunities in the metaverse. In this article, we’ll pit Meta Platforms and Microsoft against each other.

How Are Meta Platforms And Microsoft Related To The Metaverse?

The leadership of the two companies has been vocal about seeking to become major players in the metaverse. Meta Platforms even went as far as changing its name in order to emphasize how important the metaverse will (supposedly) be for the company in the future.

Meta Platform’s goals include a strong position in virtual and augmented reality gaming. The company has therefore started to buy up gaming companies specialized in this field. Meta has a dedicated metaverse business unit called Reality Labs. That is, for now, deeply unprofitable. During the most recent quarter, Reality Labs generated a loss of $ 3.3 billion, or more than $ 13 billion annualized. Not all shareholders were happy with that development of course, as it is not certain that these investments will pay off in the foreseeable future.

The company’s goals include the buildout of VR / AR gaming offerings, but Meta Platforms also seeks to offer a wide range of other services. This includes metaverse communities where people can interact and communicate using avatars, while Meta also plans to offer consumers the ability to experience a wide range of other things “in the metaverse”. Traveling to other places (geographically as well as from a time perspective) is one such service – people will be able to view ancient cities, for example.

All of this requires huge investments both in hardware as well as in software, which explains why Meta’s Reality Labs is such a money-loser today. If things go right and the company’s offerings become as attractive and as commonly used as the company’s leadership believes they will, then those current investments could pay off handsomely in the future, however. Investors should not assume that this will be a thing in the next one or two years – instead, Meta’s metaverse investments will likely take several years to start to pay off.

Microsoft is not as hugely ambitious as Meta Platforms, but MSFT still offers considerable metaverse exposure. It’s growing its gaming exposure as well, both through organic investments as well as through the planned takeover of Activision Blizzard (ATVI) that will likely close over the next year. Not all gaming is and will be AR / VR-based, but this naturally is a segment Microsoft will continue to expand into over the years. Microsoft also seeks to become a leading “business metaverse” company. Unlike Meta Platforms, it is not a purely consumer-centric company. Instead, MSFT will offer metaverse business meetings and similar technologies via its Teams platform and others. Microsoft has not broken out its metaverse investments as precisely as Meta Platforms did, but it seems reasonable to assume that MSFT is investing heavily in this space as well – and that Microsoft’s metaverse business is a money-loser for now, too.

How Have Meta Platforms And Microsoft Stocks Performed?

In the long run, both companies have delivered considerable value for their shareholders. In recent years, Microsoft has been the way stronger performer, however.

Over the last three years, Meta Platforms is essentially flat, while Microsoft has more than doubled its share price while delivering some dividend payments on top of that. The two companies actually rose more or less in line with each other through summer 2021, but Meta saw its share price drop rapidly over the last couple of months on the back of forecasting lower-than-expected growth. I do believe that this is an overreaction by the market, however. General growth trends for Meta are still in place, and the company is also still forecasting meaningful revenue growth this year – just at a somewhat lower rate.

Meta Platforms saw its revenue rise by 20% during the most recent quarter – far from bad, I believe. In fact, the company beat revenue estimates slightly, although its profits were lower than forecasted. This was the result of its larger-than-expected investments in its metaverse business, which is hurting profitability for now. That being said, Meta was still deeply profitable, generating net profits of slightly more than $ 10 billion during a single quarter.

Microsoft is even more profitable, of course. The company, which saw its revenue climb by 20% as well – ie, at a comparable rate to how Meta Platforms grew – generated net earnings of almost $ 19 billion during the most recent quarter, making it one of the most profitable companies in the world .

From a standpoint fundamentals, both companies look very strong. For example, their margins and returns on capital are highly attractive:

Both companies generate operating margins of around 40%, with MSFT’s margin being even slightly ahead of that level. This does de-risk the company’s businesses, as even some margin pressure would leave them very profitable. A company with a low margin could see its profits vanish completely when experiencing a margin headwind of a couple of hundred base points, eg due to inflation. MSFT and FB, however, would not feel a large impact from that. Their strong margins also mean that each additional dollar in revenue is highly accretive and generates a lot of value for shareholders.

In a similar way, their return on assets and return on employed capital are highly attractive – and both metrics are relatively comparable across the two companies.

Both companies also have fortress balance sheets. This is important due to two reasons. First, this reduces risks, as the companies have a lot of flexibility and staying power in case their businesses were to run into temporary problems. On top of that, their large cash holdings allow them to be active in M&A (see MSFT’s ATVI takeover) and when it comes to shareholder returns.

The two companies also differ a lot when it comes to valuation. Meta operates an attractive business, but Microsoft is arguably an even stronger company. Not only is it triple-A rated, but Microsoft also has one of the largest moats out of any publicly-traded company in the world, I believe. It thus makes sense that it trades at somewhat of a premium valuation compared to Meta, but I do not believe the premium should be as large as it is:

Meta trades at an enterprise value to EBITDA ratio of just 8, while trading at an FCF yield of ~ 8%. Meanwhile, Microsoft is trading at a 21x EBITDA multiple while offering a free cash flow yield of around 3%. In other words, Microsoft is around 2.6x as expensive as Meta is – I do not believe that the valuation premium for Microsoft should be this high. The valuation premium also used to be way smaller in the past – sometimes, FB was even trading at a premium compared to MSFT. This further strengthens my belief that FB is the better value today, as it is looking incredibly cheap compared to MSFT, even when we consider that MSFT’s business model could be somewhat stronger than that of Meta Platforms.

Both companies are active in industries that benefit from long-term macro tailwinds, such as digitalization, growing digital media consumption, video gaming, and so on. Both companies have fortress balance sheets and generated excellent returns with the capital they employ.

From a business outlook, growth potential, fundamental, and business risk perspective, both companies look thus like compelling long-term investments. Microsoft, due to its outstanding moat, could be the even stronger company among the two from a fundamental basis when we do not account for valuation.

Is FB Or MSFT The Better Buy?

As indicated above, both stocks represent quality investments, I believe. When it comes to shareholder returns (relative to market capitalization) and valuation, Meta Platform looks like the more appealing investment – it’s just incredibly cheap despite growing at a similar rate to Microsoft in the most recent quarter.

Both companies offer a lot of exposure to the metaverse. FB has a consumer focus here, while MSFT is more business-focused in its metaverse approach. Whether one favors one over the other or not is up to individual preferences, I believe. At a similar valuation, I’d likely prefer Microsoft even though Meta Platforms is a quality investment as well. But with Meta trading at less than half the valuation Microsoft is trading at, I do believe that Meta Platforms is the more attractive investment at current prices.