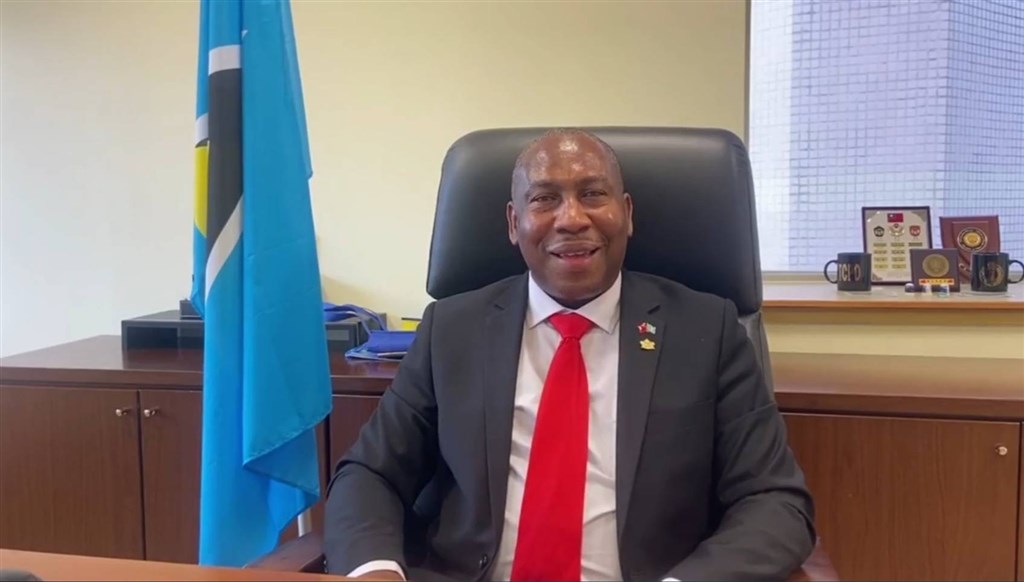 Taipei, May 12 (CNA) Saint Lucia’s new ambassador to Taiwan Robert Kennedy Lewis said in an interview with CNA he will work to strengthen ties in the fields of agriculture and education.

Lewis, who presented his credentials to President Tsai Ing-wen (蔡英文) at the Presidential Office in Taipei last week, said in an email Wednesday that his country would seek to continue its collaboration with Taiwan in agriculture, particularly through introducing technology to Saint Lucian farms to “give our farmers more help in acquiring the machinery and tools needed in modern agricultural practice.”

Agriculture is a critical industry to the economy of Saint Lucia as the Caribbean country is a big producer and exporter of bananas, and Taiwan’s help in sustaining that industry is always appreciated, Lewis said.

With Taiwan’s help, Saint Lucia has increased the yields of many fruits and vegetables, especially watermelon and pineapple, Lewis said, adding that Taiwan has also helped introduce the cultivation of wax apples.

With the expertise and technology available in Taiwan, Saint Lucia expects to increase the production of fruit and vegetables while introducing crops that can thrive in the tropical environment to add to food security, Lewis said.

Lewis added that “through education, we can make Saint Lucia’s agriculture industry stronger and more reliant. Hence, I will, through diplomatic efforts, solicit more training and scholarships in agriculture for our people.”

Currently, there are around 120 Saint Lucian students studying engineering, agriculture-related areas, and business and entrepreneurial services, Lewis said, adding that he trusts that this number can quadruple in the next three to four years.

“I am confident with my training and background in education, the increasing demand for scholarships for higher and further studies among Saint Lucians, and the assistance of our friends here in Taiwan, especially in the Ministry of Foreign Affairs, that we will reach that target. “Lewis said.

Other fields of study, which will likely see an increase of Saint Lucian students, are medicine and other medically related areas, and digital media, Lewis said.

In addition to undergraduate and postgraduate degrees, Lewis said there must also be opportunities for technical and vocational training, opportunities he vowed to pursue ruthlessly over the next three years.

Describing the relationship between Saint Lucia and Taiwan, Lewis said: “We both believe in self-determination and the need for our citizens to choose how they are governed.”

Saint Lucia intends to continue to voice and express its support for Taiwan at every given opportunity in every domestic and international forum, Lewis said.

Lewis, who had visited Taiwan on three other occasions in the past before his last arrival on March 13, said the country had become a special place away from home for him since he celebrated two birthdays in Taiwan while serving as a government minister.

Lewis, an educator of mathematics and statistics by training and profession, graduated from the University of Otago, Dunedin, New Zealand with a Ph.D. in mathematics education in 2005.

Lewis entered elected politics when he won the race for Castries South in the Saint Lucian general election on Dec. 11, 2006, as the Saint Lucia Labor Party candidate.

On Dec. 5, 2011, he was appointed as minister for education, human resource development, and labor, serving in the Cabinet of former Prime Minister of Saint Lucia Kenny D. Anthony until June 6, 2016.

Lewis retired from electoral politics on June 6, 2016, and reverted to his teaching career until June 30, 2021.

On Feb. 2, he was appointed as Saint Lucia’s ambassador to Taiwan and arrived in Taiwan on March 13.

He presented his credentials to Foreign Minister Joseph Wu (吳 釗 燮) on April 20 and President Tsai on May 5.