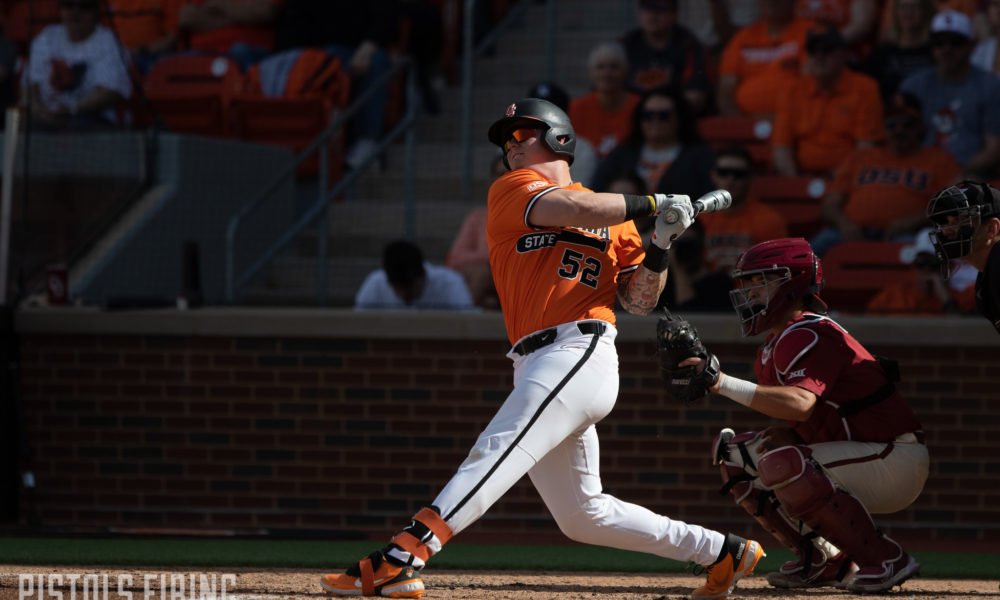 STILLWATER – The Cowboys’ aggression on the basepaths bit them again.

The Cowboys were 90 feet away from pulling off a ninth-inning comeback, but instead they fell to Texas Tech 7-6 on Friday in the teams ’series opener at O’Brate Stadium. Jaxson Crull, who was on as a pinch runner, darted to home from third after a ball got away from Tech catcher Hudson White, but the ball didn’t get far enough away.

White corralled the ball in time to give Crull second thoughts. Crull turned and ran back to third in a Sandlot-esque pickle. After a throw to third and a throw back to the plate, Crull was tagged out in the middle of a head-first slide toward home. The game was over.

“Jaxson tried to score on a wild pitch,” OSU coach Josh Holliday said. “He took a chance – didn’t work. I love the fact that he wasn’t afraid to try something. If he had it to do over again, he wouldn’t have gone, but he thought he saw something. Kids are in the heat of competition. They’re playing to win. He had an instinct to try to go, and you know what, yeah, in the end he didn’t have the gap he needed to get there and everyone talks about that. But, that sucks because that play didn’t decide that game. It’s just how the game ended. I’d rather have a kid playing to win and making a mistake than a kid afraid to win, who’s unsure. ”

The momentum was on the Pokes’ side. The No. 3 Cowboys’ entered the ninth down a pair of runs but had a two-out rally going.

Jake Thompson got things started with a double to right center. After a pitching change, Thompson advanced to third on a wild pitch and Griffin Doersching drew a six-pitch walk. Crull came on to run for Doersching before David Mendham pulled through with a single to right, scoring Thompson and putting Crull on third.

That brought up Nolan McLean, OSU’s leader in home runs, and another pitching change. McLean took his third ball with that pitch that got away from White. Had the game not ended, McLean would’ve had a 3-1 count.

“I expected us to win that game,” Holliday said. “I envisioned us winning that game – I did.”

Although that last play will get put under a microscope, an uncharacteristic start from Justin Campbell put the Pokes in a different kind of pickle.

Texas Tech built its lead thanks in large part to a five-run fourth inning, an inning that was built off a tortilla-wrapped grand salami.

Campbell, OSU’s All-American righty, struggled by his standards in the first three innings, giving up two hits and two walks with a higher-than-normal pitch count, but he kept No. 8 Tech off the board.

But Tech shortstop Kurt Wilson started the fourth with a leadoff triple, and Owen Washburn followed that up with a double to score Tech’s first run. Campbell forced a pop up before issuing another walk. He got a strikeout for the second out of the frame before loading the bases when he hit Easton Murrell with a pitch. That brought up Cole Stillwell, who send a ball into the OSU bullpen for a grand slam. That gave Tech a 5-2 lead.

Campbell threw five innings where he gave up six runs off six hits while walking five, hitting one and striking out six. The outing is tied for the most runs he has given up this season.

“He looked like he was fighting it all night long,” Holliday said. “He was competing his tail off, just nothing was coming easy – it happens. Guy has been so darn good. He just had one of those nights where he just couldn’t find that comfort. ”

The teams traded runs in the fifth, making it 6-3. That fifth inning started a three-inning streak where the Cowboys added a run in each inning, chipping away at the Red Raiders’ lead.

Doersching hit his longest home run of the season, and that’s saying something. In the seventh inning, Doersching blasted a ball well over the jumbotron in the left field. It came in at 513 feet, but if the machine that determines that stuff would’ve read 600 feet, it would still have been believable.

It was Doersching’s ninth home run of the season and fourth in the month of May.

In Allie P. Reynolds Stadium, it was always a big deal when someone hit a ball over the net in the left field protecting the softball field. Perhaps the new landmark will be the scoreboard in left at O’Brate.

“One of the longest home runs I’ve ever seen,” Holliday said. “Absolutely titanic. … That net couldn’t hold him. That ball would’ve gone over the softball field. That ball would’ve never seen Cowgirl Stadium. It would’ve been rolling on McElroy Street. It would’ve hit the old house I used to live in on the corner of McElroy and Washington or Knoblock or whatever that street is there. That’s a 575, 600-foot home run. And anyone who says it’s not wasn’t paying attention. ”

This game could be a big one in the Big 12 title race. Tech is now on the Cowboys’ heels in the Big 12 standings with five games to play for each team. Here are how things are shaking out:

OSU and Tech will go again at 6 pm Saturday in O’Brate Stadium.