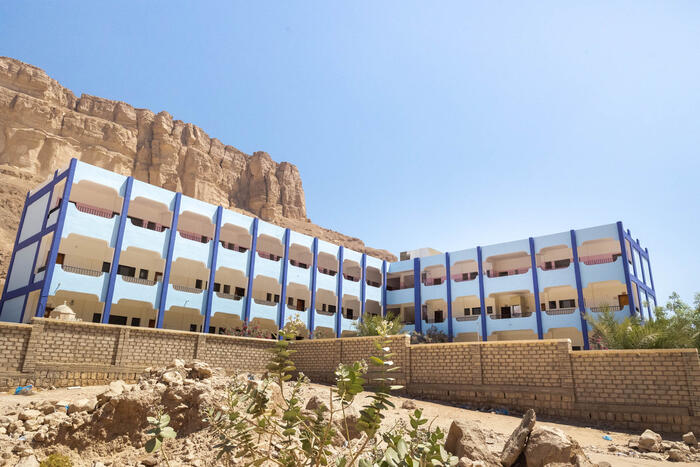 Hadramawt, 22 June 2022 – Eighteen-year-old Fatima was supposed to finish her studies this year and start preparing for university. But the conflict in Yemen uprooted her life and pushed back her timeline.

“My dream has always been to finish a master’s degree, but the conflict has had a negative impact on my life. Sometimes I think about quitting school altogether, ”said Fatima, who is now two years behind her education compared to her peers.

In 2018, Fatima and her family were displaced by armed clashes in Al Hodeidah to Hadramawt, on the other side of the country.

She had to leave behind her classes in the middle of the school year, and wait another year to enroll in school in her new home. Then, difficulties with transferring her certificates and the COVID-19 outbreak set her back even further.

“It was the worst feeling to see all my peers going to school while I had to sit in the house and just wait. Every day, I felt my future slipping out of my hands. I was worried I would not achieve anything in my life. ”

Seven years of conflict, severe economic decline and the COVID-19 pandemic have greatly impeded access to education for school-aged girls and boys. The education system in Yemen is on the verge of collapse, affecting 6.1 million boys and girls enrolled in formal education.

Fatima’s father, Ali, knows the value of keeping his son and four daughters in school.

“We came to Hadramawt searching for a safer place where my children can live and continue their studies. I want to provide them with a good education, so they don’t live in ignorance, ”said Ali.

“Education is the most important thing in life. It deserves all the sacrifices we must make. ”

Fatima is one of 870,000 children in Yemen who have had their education interrupted due to frequent displacement and conflict in the country.

“It was painful for me to see Fatima crying when she was out of school despite how hard I was trying to find her a place in a classroom.”

“Schools provide children with knowledge, and knowledge is powerful and can protect them from everything. Schools also promote compassion in the community and create an educated generation that loves peace and frowns upon conflicts, ”added Ali.

In 2020, Fatima and her father were relieved when she finally enrolled in Al Khansa School located near their new residence.

“It is important to have schools near where students are living. It is difficult for female students to travel to far away schools, and makes their parents exhausted with worries about their safety and transportation costs, ”said Ali.

“This school was the first place that welcomed me after becoming displaced. I was so happy and relieved to finally return to school where other girls were also studying. I no longer felt helpless by my situation, ”added Fatima.

Fatima was relieved to have a new school within walking distance, but Al Khansa School was still not the most ideal place for learning. The classrooms were small and overcrowded, with over 90 students in each class. Students found it hard to concentrate or take in information.

It is estimated that more than 2,900 schools in Yemen have been destroyed, damaged, or used for non-educational purposes, affecting the learning of about 1.5 million school-aged girls and boys.

At the same time, even functioning schools across the country are overcrowded and under-resourced, and often inaccessible. Many do not have enough textbooks or teaching and learning materials, or gender-sensitive water, sanitation and hygiene (WASH) facilities. These protection and safety concerns lead parents to keep their children – especially girls – at home.

To enable all children to return to school and support learning environments in Hadramawt, the International Organization for Migration (IOM) and the King Salman Humanitarian Aid and Relief Center (KSrelief) partnered to rehabilitate four schools in Hadramawt.

Rehabilitation and construction work in the schools were undertaken according to each school’s damages and needs.

The intervention in Al Khansa School includes the construction of a two-floor building of new classrooms, latrines and an administration room. The building was re-painted and supplied with air conditioners, better furniture and wider windows to allow for more natural light.

“Al Khansa School changed completely after these interventions. This school has saved and secured the future of displaced girls who came to Hadramawt. It welcomes them and gives them a place to continue their studies. ”

“Girls are no longer prevented from pursuing their education and have higher hopes for a better tomorrow,” added Fatima, who is now one of the top students in her class.

“In addition to supporting the education of students in the area, this intervention has also greatly reduced tension between the host community and new arrivals. It enhances the school’s capacity to receive newly displaced students which reduces tension among the two communities, ”said Nawwar Al Namri, IOM Transition and Recovery Project Assistant in Hadramawt.

IOM and KSrelief partnered to build or rehabilitate 15 schools in four governorates around Yemen. This project aims to address the major gaps in schooling and education to improve the educational services for returnees, host communities, and displaced communities.