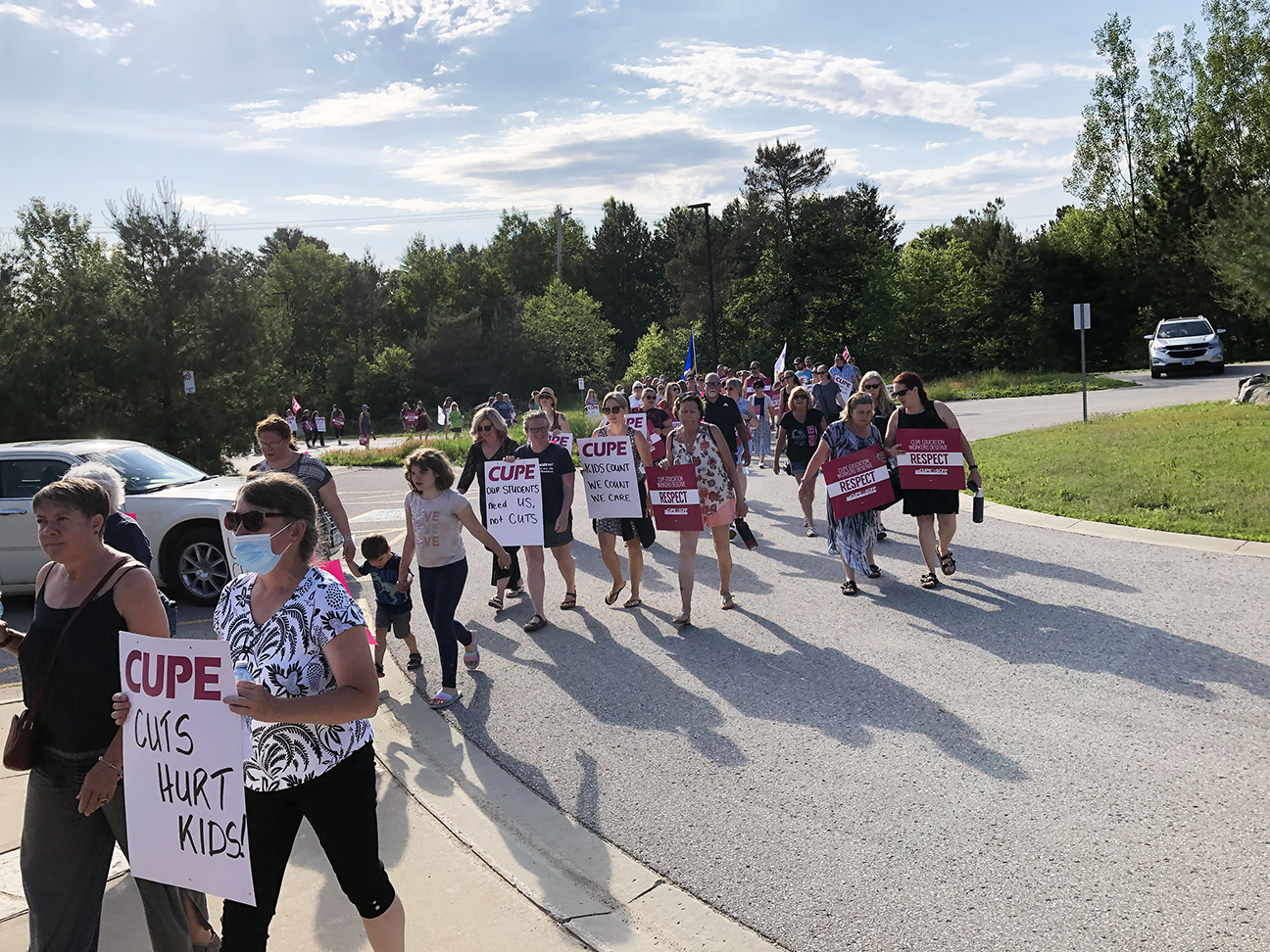 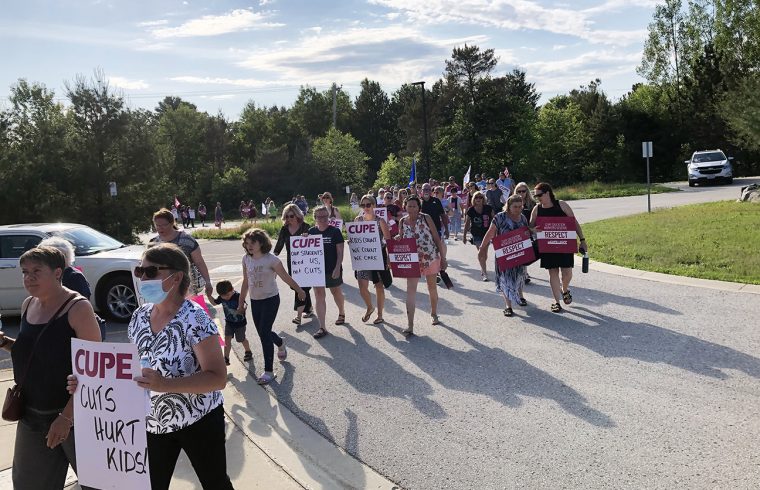 CUPE local 997 held a rally outside the Muskoka Education Center in Bracebridge on June 14, before CUPE 997 president William Campbell made a delegation to the Trillium Lakelands District School Board board about staff cuts. “We’re bringing our pink slips to the school board meeting today, so TLDSB trustees have to see the human faces of their cuts,” said Bill Campbell, president of CUPE 997 in a statement. “Not only should there be a moratorium on any more damaging cuts that hurt students, it’s time for a budget that funds more staff to support students, more staff to properly clean schools, and more staff to keep everyone safe.” / Photo submitted

The following are brief reports of items discussed at the June 14 meeting of the Trillium Lakelands District School Board, held in-person and broadcast via the board’s website.

On June 11, a post made to the Facebook page of Yearley Outdoor Education Center protests the closure of the longtime outdoor center in Huntsville by the school board.
Trustee Louise Clodd asked for clarification about overnight camp, and what the plan and short-term solution would be if the board is moving away from using Yearly. She said she had received numerous phone calls and emails about it.
“Yes, there will be outdoor education, there was never going to be outdoor education,” said TLDSB director Wes Hahn. “We were going to make sure it happens.”

Hahn said a review of the current outdoor site had led to some concerns.
“We have some health and safety concerns, we have some concerns with the grounds and frankly now that we know some of the tree cutting has been done, we have even other situations occurring there that would not allow us to get back in,” he said. “On top of that, two years of not being in use, we have some things we’re concerned about. Let’s be honest, let’s be really straight here, we’re looking at the safety of staff and students when they are there. And that’s what we want to make sure is primarily our main focus. ”
Hahn said the school board doesn’t own the property, and said it’s unfortunate that “there’s some misinformation out there about this, because we’ve heard comments that we’re going to sell the property, that we’re going to do some other things with it, but we are not – we don’t own it, we lease it. And so there’s not much we can do with the actual physical building or the pieces with it but we are going to make sure that in our review next year, that that is part of the process. Yearly will be part of our review, along with other sites. ”

Hahn said the board wants the best outdoor education site for students.
“I think we all agree that those kind of experiences are outstanding. Our school’s sites alone are mini-outdoor education sites. And so we know that teachers and our support staff are doing that within our own schools. It’s not going away, we are in support of it. As a matter of fact, we believe long-term, we’re hoping, we’re hoping, we can build an outdoor education center ourselves. We’re looking at all these possibilities, they were always there. It’s unfortunate maybe some of that information wasn’t clear. “
CUPE 997 president Bill Campbell said the school board had issued two layoff notices for the outdoor education technicians that work there. The school board had not responded to questions about those layoffs by press time.
The Facebook post compared the loss of the Yearly Outdoor Education Center, in use for some 40 years, to the closure of the Frost Center in Dorset.
Long-term accommodation plan
An updated long-term accommodation plan, a document used to guide capital investment, programming and facility decisions, was presented to the board by superintendent of business Tim Ellis. The plan will be updated and presented to board trustees annually, and will be available at tldsb.ca for the public’s access.
Director reports on challenging year
Director Wes Hahn told the board he’s visited almost all of the schools in the board’s region this year, and acknowledged, “This year especially was incredibly challenging.” He said the “constant change” of staff and students to pivot between at-home and in-person learning was “incredibly difficult.”
“We have a learning focus in our system even in the most complex periods of that time, at the forefront,” he said. “It wasn’t the same, and you’ve heard me talk about that before, but we still made it a priority. We didn’t want to come out of the COVID situation and be starting over. That wasn’t easy. When we looked at the complexities, to keep that moving, we did appreciate it. ”
Hahn said he appreciated the work of staff and parents and guardians to manage during the pandemic.
“I’ll be glad at some point in time not to have to do a COVID update, I have to tell you,” he said. “I know people are tired of it, and we have moved on, and we are going to continue but it hasn’t left us yet. We’re still monitoring that. ”
Hahn said he had recently heard a researcher at a conference speak to the effect of COVID-19 on the population.

The researcher said that 18 to 34-year-olds have greater mental health concerns and feelings of less optimism than some other age groups.
“What the researcher had indicated to us is that age group was one of the highest optimism groups prior to the pandemic, so it has shifted and we know that, it’s not new to us,” said Hahn. “But it’s something we’re going to have to work on and focus on here in our system and we are.”
He said TLDSB has “opportunities we’ve put in place from a support staff point of view and teaching point of view to make sure we can deal with these types of situations.”

The board is adding a School Support Team – five itinerant teachers for inclusive education and four itinerant educational assistants, new positions at TLDSB, with the team’s goal to “support and model instructional practices to improve student achievement and well-being,” according to TLDSB communications. Two additional teaching and learning coaches have been added to the school system for the 2022 – 2023 year, to work side-by-side with and support educators.
Hahn said the board is currently analyzing the results of the recent school climate survey, which he said details positive points about how students and parents are feeling as well as issues and concerns around anxiety and belonging.
Later in the meeting, trustee John Byrne said he had recently attended an assembly at Fenelon Falls Secondary School.
“They are so over COVID, and they’re very resilient people there,” he said. “It was nice to shake hands, not see many people with masks on – some still which is fine – but I’m not sure how well that study really shows the resilience of some of our students.”

Next board meeting
The next board meeting will be held on Aug. 23 at 6:30 pm at the Muskoka Education Center in Bracebridge. It is broadcast live online at tldsb.ca and meetings are also available soon after the live broadcast for viewing.