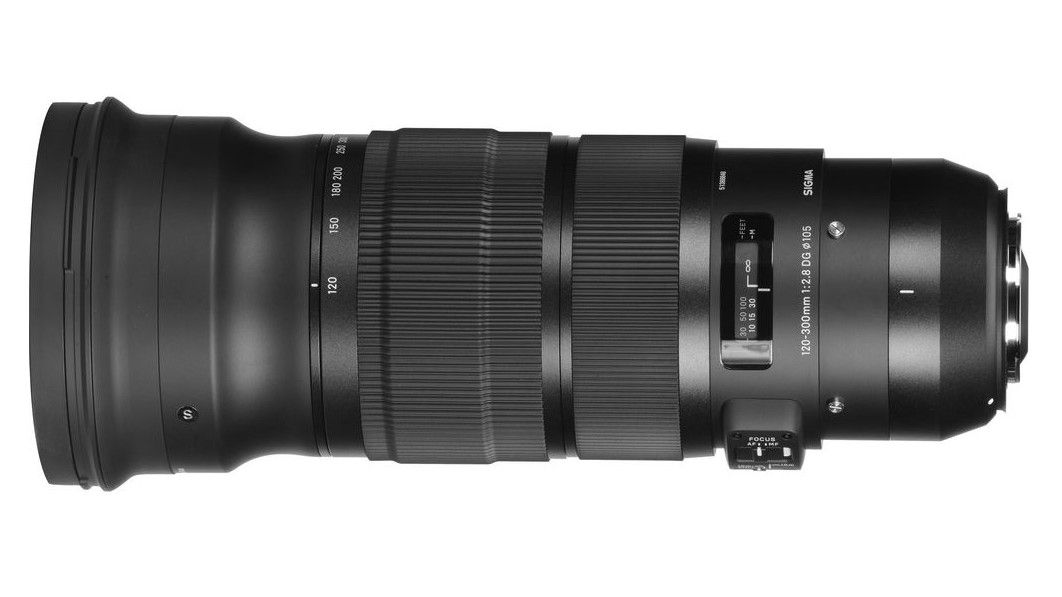 The Sigma 120-300mm f / 2.8 DG OS HSM Sports spent the first seven years of its life as the only lens in the world to feature this zoom and aperture combination. Nikon then launched its own version (opens in new tab), which is marginally lighter in weight but has a much heavier price tag. The Sigma is very much better value for money and still boasts seriously good performance and a neat range of extras.

It’s a big ask to deliver 50 percent more telephoto reach than a 70-200mm lens while maintaining a constant f / 2.8 aperture. The result is a big lens that weighs in at almost 3.4kg. That’s more than twice the weight of most top-flight 70-200mm lenses.

The first launch in Sigma’s Sports line, this lens features a Custom modes switch. Autofocus speed, autofocus limiter distance and stabilization effects for these modes are customizable via Sigma’s optional USB Dock. It was also Sigma’s first lens to feature weather-seals, although it lacks the 70-200mm Sports lens’s fluorine coatings, dual switchable autofocus modes and AF-on / hold buttons. Both lenses have an SLD (Special Low Dispersion) element but this one only has two top-grade FLD (‘Fluorite’ Low Dispersion) elements, whereas the 70-200mm lens has nine.

There’s a switchable dual-mode optical stabilizer for static / panning shooting and, while the Sigma lacks the Nikon’s ‘Sport’ stabilization mode, you can limit the stabilization effect in the viewfinder as one of the custom options.

As you’d expect with a lens of this weight, the Sigma comes complete with a tripod / monopod mounting ring, which you can remove for handheld shooting if you feel the need for a bodybuilding spot.

The ring-type ultrasonic autofocus system proved very fast and consistently accurate in our tests, and the optical stabilizer was worth about four stops. Center-sharpness is simply spectacular throughout the entire zoom range, even when shooting wide-open at f / 2.8. There’s a little color fringing at most focal lengths and it’s quite severe at the 180mm mark, but distortions are mostly well controlled. Overall, the Sigma is a really solid performer.

We run a range of lab tests under controlled conditions, using the Imatest Master testing suite. Photos of test charts are taken across the range of apertures and zooms (where available), then analyzed for sharpness, distortion and chromatic aberrations.

We use Imatest SFR (spatial frequency response) charts and analysis software to plot lens resolution at the center of the image frame, corners and mid-point distances, across the range of aperture settings and, with zoom lenses, at four different focal lengths. The tests also measure distortion and color fringing (chromatic aberration).

Center-sharpness is exceptional even when shooting wide-open but levels of sharpness towards the edges and corners of the frame are rather more average.

There’s negligible color fringing in the 250-300mm sector of the zoom range and it’s only minimal at 120mm. However, fringing can be quite noticeable at focal lengths of around 180mm.

There’s virtually no distortion at the short end of the zoom range and its very minimal in the middle sector, but slight pincushion can be just about noticeable towards the long end.

It’s hard to think of any lens costing north of around £ 2,500 / $ 3,500 as ‘great value’. But the combination of a 120-300mm telephoto zoom range and a fast, constant f / 2.8 aperture doesn’t come cheap. To put this Sigma into perspective, it costs around a quarter to a third of the price of the directly competing Nikon AF-S 120-300mm f / 2.8E FL ED SR VR (opens in new tab), which came along seven years later, yet pretty much matches the Nikkor for performance. Bargain!