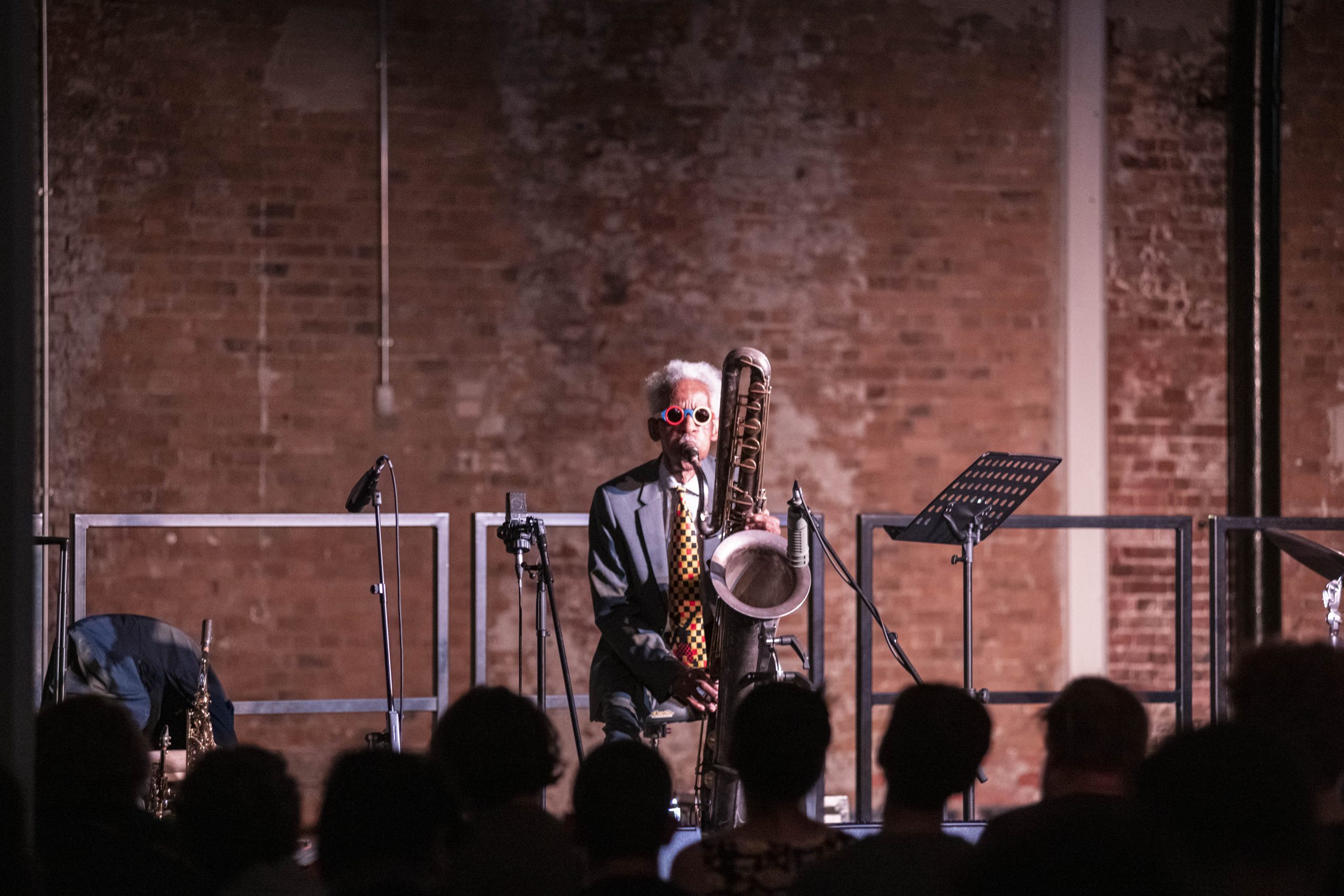 Elvin Brandhi’s GIFF WRECK (2022) begins on a screen, where two people sitting together on a video call in a dim living room start screaming into an autotuned microphone. Across the cavernous space at Woolwich Works (a new arts venue situated within southeast London’s former munitions factories), an orchestra jolts out notes, chords, percussive stabs, then strings slide down a lattice of scales as the two people start humming, or quietly wailing in an almost choral cacophony. A call and response between the two then ensues, the orchestra mimicking incomprehensible vocal noises with comedic accuracy. There is a childish mania to it, and an attempt at finding harmony amid the madness.

Brandhi’s work was commissioned for the London Contemporary Music Festival (LCMF), whose edition this year, The Big Sadaims to place ‘broken’ states at center stage: program notes outline melancholia as the ‘fundamental passion of the hyperreal order’, according to writer Alex Mazey’s Sad Boy Aesthetics (2021); the ‘fertile and forlorn plains that exist between reality and desire’; and Jean Baudrillard’s description of the ‘vertiginous seduction of a dying system’. Across five curated evenings of music and visual art (with some poetry), LCMF takes the task of speaking to such knotty topics – and capturing these particularly contemporary manifestations of sadness, made chaotic by online modes of communication and experience, dislocated by a delocalised community , late capitalism and, most recently but pertinently for this festival, a pandemic.

On the surface, many of these curated and commissioned pieces shoot for this ‘hyperreality’, while capturing moods that might feel familiar. Stom Sogo’s agitated films Silver Play and Ya Private Sky (both 2001) collage distorted TV footage that catch on certain moments – a raucous television studio audience applauding, or a wrestler’s slapstick fall – for dozens of loops, while a glitchy soundtrack draws winces. It lavishes in its almost anti-aesthetic pastiche of the unsatisfying and the nightmarish, uncannily preempting in 2001 the imprint on the mind of days spent alone and online. Oliver Leith’s symphonic Pearly, goldy, woody, bloody, or, Abundance (2022), commissioned for the LCMF orchestra, plays on cinematic tropes of sweeping strings and dramatic horn phrases while the orchestra’s members mutter and chatter, and a trickling water feature plays over the PA – a parody of louche, high-society parties. Mariam Rezaei’s live turntable performance, SADTITZZZ (2020) chops mechanical sounds with fragments of trumpet solos, scattershot drums, bursts of synth and double bass; the ear searches for structure and finds instead a palimpsest of sound. A member of the audience across the room from me, standing against a metal pillar, leans his forehead against the cold metal. It is a hot day in London for works that, while challenging, also feel a little guileless.

Such esoteric work abounds, and it is ironic that Tyshawn Sorey’s For Roscoe Mitchell (2020), a stirring piece led by cellist Deni Teo, is one of the few to flirt with something resembling sonic familiarity to the lay listener. When it comes to that piece’s dedicatee, though, this (thankfully) could hardly be the case. A founding member of the Art Ensemble of Chicago, Mitchell seems to draw anything and everything out of his reeds (from baritone to soprano saxophone) and, in closing Saturday night’s proceedings, dominates the edition’s focus. Beginning solo, his notes squeak out in fits and bursts as trademark runs seem to spiral concentrically, while others intermittently ring clean and full. As his partner and percussionist Kikanju Baku arrives – walking to the stage from behind the audience, enigmatically concealed by a conical hat and mask – they leap into high-octane free jazz. For all the adrenaline, Baku eventually eases off the fills and cymbals, relaxing his grip on the piece to Mitchell’s mustered notes, which return like stifled attempts to inhale or express a syllable.

Enigma preoccupies Friday’s closer, Triad God, who fuses electronic production with Cantonese and English spoken word, and whose commission Triad God’s Coda (2022) is concerned with anonymity and the absent artist. Displayed on a screen (the dimensions of a phone display), his image looks out to the audience as an assortment of his music plays out, the only lighting coming from a single red beam cast horizontally across the space and the white glare emanating from the display. A woman, in many ways dressed fit for a minor role in the latest Matrix, ceremonially walks down the traverse aisle to the screen, lighting incense and noting the offerings laid out on a table at the image’s feet. This memorial of sorts sits happily (but only just) on the right side of compelling or self-satisfied, the disquieting nature of this ‘performance’ of absence enhancing the eerie effects of his music (the pitch-shifted vocal samples, some of which crackle imperfectly like bootleg internet rips, are not dissimilar to Burial, that other famed musical enigma). On Sunday, The Grief Interval (2020), a short film by Aura Satz and Sarah Davachi, pairs footage of a camera sweeping round the inside of a power plant cooling tower with a sustained organ drone (much like Kali Malone’s outstanding The Sacrificial Code, 2019), shifting chords gradually but surely. Onscreen text offers the sound as a new call to emergency for ’emergent disasters too slow to sound the alarm’. Disquieting and beautiful, the tone feels pregnant with future grief, as if all the sounds of strife and doom we expect but cannot yet see could be compressed into one.

But in all these attempts to speak to ‘hyperreal order’ and the ‘vertiginous seduction of a dying system’, ‘hysterical’ and ‘ruined’ states, maybe something simpler is achieved here: a resignation to concede control (and revel in it) – or at least, just for a moment, to appear to. Near the close of the festival’s final night, Joëlle Léandre’s two improvised solo pieces on double bass see her dragging across and pulling at the hulking instrument’s strings with all the tension of chaos falling in and out of control. Humming and murmuring to herself as her playing fades away, her bow-in-hand motions above the strings, playing phantom notes we can see but cannot hear. As if, drained of anything else, muscle memory is all she has left. “It’s like that,” she concludes.